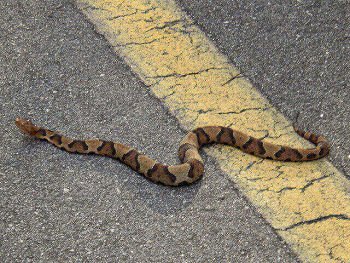 A lot of people believe that the copperhead, also a pit viper, is a highly venomous snake. But after a little research, one will find that’s simply not true. To the contrary, copperheads, unlike the previously discussed Malayan pit viper, are one of the least venomous and deadly snakes.

Also, their hunting habits are quite different from those of other snakes. They ambush preys, which means they wait for their prey until the right time comes to attack. But just like the Malayan pit viper, the snake will stay still if it encounters a human, instead of slithering away. This and with the fact that they blend well with their environment make it easy for people to step on them. resulting in the high frequency of bites reported.

The venom from the snake is currently being studied because of contortrostatin, a protein that seems to be able to stop the growth of cancer cells as well as stop tumors from growing in other parts of the body.

This is yet another example of advances in medicine that seem to come from venomous creatures. One can’t help but be amazed at the advancements that scientists continue to make.