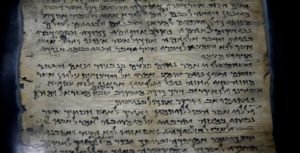 The Dead Sea Scrolls, also known as the Scrolls of Qumran, so named for their discovery within the caverns and caves located in Qumran, on the shores of the Dead Sea, corresponding to the oldest and most complete testimony of biblical texts found to date.

There a total of 972 manuscripts and most of them date back to a period between the years 250 BC and 66 AD, before the destruction of the second Temple of Jerusalem by the Romans a few years later. Most of the manuscripts are written in Hebrew and ancient Aramaic, with only a few of them being written in Greek. While very many of the manuscripts have been found intact, several were torn into fragments when first discovered to increase the profits from their sales.