Is The Curious Case Of Benjamin Button Real? 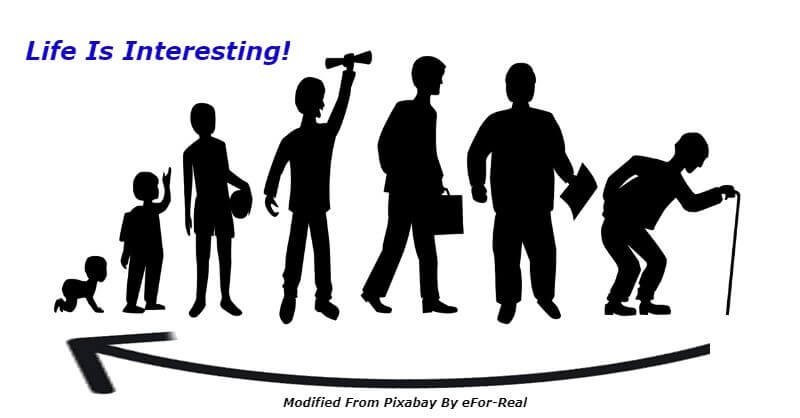 It may sound wrong and disrespectful, in some quarters, to say that old people behave like kids because of some important differences, but there are, indeed, some solid reasons why this is true.

These reasons make one wonder if there are not two phases in life— The childhood phase at birth and during old age, and the middle age phase, which lies between childhood and old age.

In other words, it would seem that people tend to dominantly act like kids twice in life--during the early stages, after the initiation of life and towards the peak/end of life. I use the word dominantly because there are anomalies with regards to some middle-aged adults who sometimes display the kid in them.

I am sure that, at this point, some of you may be wondering how this post relates to the movie? Well, to make it clear, let’s first review, for those of us that have forgotten or are yet to view the movie, what the movie is all about.

The curious case of Benjamin Button, starring Brad Pit, denotes an unusual baby who is actually born as a 70-year-old man. The baby begins to grow younger at the same rate that everyone else gets older but in reverse.

As he grows, his parents wanted him to act like a normal kid, but he just couldn’t because of his peculiar nature and state of mind. When he reaches the age of 50, which in his case was actually 20, he falls in love with women, Daisy, who was played by Cate Blanchett. Daisy, fortunately for him, seems to appreciate the company of older men, and so they both get married and have a son.

As Benjamin Button grows younger and his wife grows older, he starts losing interest in her and leaves her, heading off to the Spanish-American war. On his return, he is about the same age as his son. Benjamin continues to grow younger and goes to Harvard. By the time he is done with his graduation, from Harvard, he is young enough to go to prep school.

His son is extremely concerned about him especially when Benjamin Buttons grandson is of his age. The two of them end up playing together. As time passes, Benjamin is young enough to go to kindergarten, and he even becomes too young for that. He starts forgetting everything, as he keeps getting younger to the point where he can only remember the colors or the smell of milk and even that slowly fades until he dies as a newborn baby, which, in normal age, would be at the age of 70 years.

One of the takeaways from the movie, as initially stated, is the uncanny resemblance in behavior between a baby and an old person.

As the movie may inform us of the lesson that we always end up how we started. And that is, how towards the end of one’s life people start doing the same things that they did after conception. For example, they cannot walk when they want to, or they cannot talk and are unable to communicate their message just like kids. It is as if life begins to move in reverse back into the womb.

Other ways that some old folks may act like kids are noted below:

For example, when they start to get irrational and start crying or whining like a kid who wants something, but cannot get it.

When some old folks cannot walk, at some point, they have to stay indoors and can’t see the outside world by themselves, which tends to build up frustration that they throw tantrums like a kid.

Some old people cannot cook for themselves and so are dependent on others for food. When they get hungry and nobody is there to make them food or the food is late, they will begin to act like kids.

Some old folks, at some point, can’t eat solid foods such that they have to be given mushy foods or they have to get their diapers changed because they cannot get to the restroom themselves.

The memory of some old folks, with time, deteriorates and they have difficulty remembering things. Most old folks forget how they spent their whole lives and only have fragments of memories left, and even then, they find it difficult to hold on to those fragments.

Sometimes, they would even forget the simplest of things like their kid’s name, taking their medicine or their home address. While this may be linked to a certain disease like dementia, memory deterioration is a common problem in old people and like kids, they have a hard time memorizing/ remembering things.

Some old people, as they cannot be left alone, also need someone to keep them company, be it their children or someone at an old home. They need this company for so many reasons, including their inability to do important tasks by themselves.

Unlike adults, they do not have any jobs or any other reason to get out of bed every day, and so another reason why old people enjoy the company of others is that they need someone or something to look forward to that would keep them busy. Old folks need reasons to wake up every day and do something new.

Most of them, while it may be a harsh reality, are just waiting for their days to end. This hopelessness is mainly caused by their lack of purpose. And this is when they start behaving like kids again to keep themselves busy and to make it through the day. They do this by playing board games, reading books and watching television to mention a few of these. And guess, what? These are some or all of the things that a kid would do, and of course, with the exception of physically demanding games.

In summary, there are, indeed, many reasons why old people would behave like kids which could be generalized as their inability to control things, which frustrates them, resulting in their childish behavior.

With all that said, we must all strive to afford them the respect that they deserve, and be very careful in preserving their dignity. While they may act like a kid, they are not actually kids, as they have lived a whole life, and their years are full of experiences, both good and bad, which we could learn from.

We cannot treat them as if we would treat a kid, we cannot pretend that they are not there, and we cannot leave them out of decisions. That is part of what makes them adults and we have to treat them as such.

In addition, we also need to remember that we can also learn from their experiences. We should not be quick to discard their experiences by labeling them old and not relatable to the modern era. There is always a lesson hidden somewhere in the minds of these old people, which can always help us learn something new. There is no substitute for invaluable and unique knowledge and wisdom than those which come with old age.